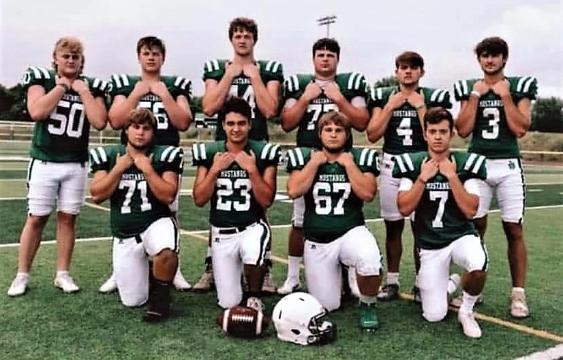 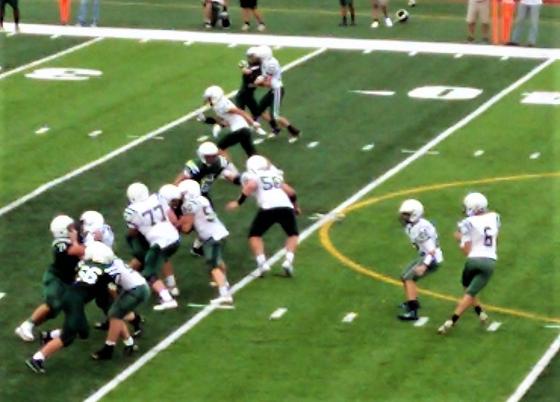 A large crowd was on hand Friday night at the MAC, to usher in the 2021 Brossart Football Season.

Introduced to the fans were our Junior High Colts (Top) and Colts Cheerleaders, followed by our Mustang Varsity Cheerleaders, and then the Varsity Mustangs Football Team.

So far as intra-squad exhibitions go, this was a pretty good one. The team were divided equally into Green and White squads, with the end result being the White Team prevailing 15-7, in a contest not decided until the final play – a safety. Ten seniors (upper-left) played in their final Green-White night event.

The scrimmage was played in two twenty-five minute running halves. The scoring got underway seven minutes into the event when Jacob Leicht went on a 50 yard ramble up the sideline for a Green team touchdown. First-string place-kicker Andrew “Dewey” Schwartz, knocked home the extra point, giving his squad a 7-0 lead, which stood up through half time.

The white team answered at the 12:20 point in the second half when a 43 yard drive culminated in a David Govan plunge into the endzone for a touchdown. Newcomer, Sophomore Alejandro Arguelles, split the uprights and the event was knotted at 7s. Eight minutes later it was Junior Mason Meyer who carried the piggy 26 yards for the White team’s second score of the night. The PAT attempt was no good, and the score was White 13, Green 7 with 4:48 to play in the game, leaving Leicht and his unit with plenty of time to orchestrate a drive to salvage an eleventh hour victory. However, the White team defense was relentless, and when Leicht was thrown for a loss in the end zone for a safety, the White team lead expanded to 15-7, which would prove to be the final score.

As a casual observer, I was impressed that we had 38 players dressed for this event, with two of them unfortunately on the long-term injury list. Jacob Leicht presented the persona of a proven veteran, one who accumulated 746 yards rushing a year ago, but the quarterback cupboard is not bare for the future. Junior Mason Meyer did a creditable job, as did Freshmen Keegan Gulley, and Tyler Holtz. Holtz received a rude welcome to high school football, being sacked for a major loss on his first play from scrimmage, but the durable greenie responded by completing back-to-back big yardage completions later on in the scrum.

I thought that my man, Nate Schalk, had a big night, being in on big defensive play after another. Jed Martin appears to be in line for the Mustang workhorse role, Junior Luke Piscitello is transitioning into the kick-off, punter role, and will probably back up Jacob Leicht as the punter. David Govan “moved the pile” on several occasions, a role he will be asked to fill as our resident fullback. Senior Thomas Sayers is indisputably a major team leader on the defensive side of the ball, and has many tackles in his senior year future.

The Mustangs will be back in action in formal scrimmage action next Friday night at the MAC when we host both Lexington Sayre and Gallatin County and will learn more.

Sometimes, in-game references and coined phrases can be confusing, so we thought a glossary might help.

Both the Munninghoff Family Stadium at the MAC, and the Seither Center gymnasium provides ability to watch the games online or through other streaming outlets. The games can be viewed on your computer, phones, tablets, and streaming devices (AppleTV, FireTV and Roku). We have partnered with the NFHS to make this happen.

This does come with a subscription fee. You may choose from a monthly or annual subscription. If you sign up via the button below, BBHS does receive a small portion of that fee.

(All GoFan purchases are subject to a service fee per ticket/pass.)